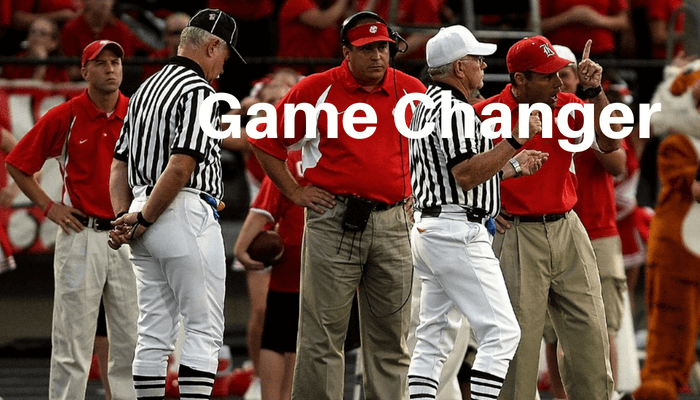 In sport one change can transform the result. We can probably all remember a sports event where a coach has made a decision that has literally changed the game. Perhaps it has been a strategic move or a change of personnel. It has become a game changer.

In 1980, while working at the European Particle Physics Laboratory in Geneva, Tim Berners Lee first described the concept of a global system, based on the concept of ‘hypertext’, that would allow researchers anywhere to share information. He also built a prototype called ‘Enquire’.

In 1989, he published a paper called ‘Information Management: A Proposal’ in which he married up hypertext with the Internet, to create a system for sharing and distributing information not just within a company, but globally. He named it the World Wide Web.

During the past few hundred years there have been people who have changed our world – people like Martin Luther King, Nelson Mandela, Albert Einstein, Thomas Edison, Michael Faraday, Louis Pasteur and latterly, Bill Gates, Steve Jobs, have been game changers.

They have changed the way we live.

I love the story of King Josiah in the Old Testament (you can read his story in 2 Chronicles 34).

WHAT MADE JOSIAH A GAME CHANGER?

My wife, Julia and I have been binge watching the Crown on Netflix. We love it! I can only imagine the massive challenges Elizabeth faced becoming Queen at 25 – but imagine becoming King at 8! That’s what happened to Josiah and even at that early age he became a game changer. What made him a game changer?

It’s highly unlikely you or I will ever be a king or queen, however you have the potential to change your life or the world around you! So what can we learn from young Josiah?

Something caused that young man (16) to start to really seek God.

Have you discovered how to really seek God?

This becomes even more critical when we want to see something change.

We each need to discover how to do this for ourselves…

“The lions may grow weak and hungry, but those who seek the Lord lack no good thing.” (Psalm 34:10)

Is it time you began to really seek God….to see and bring about real change in your life?

I wonder where do you need this? There really is no substitute for reading God’s Word each day. What does the bible say about the bible?

“For the word of God is alive and active. Sharper than any double-edged sword, it penetrates even to dividing soul and spirit, joints and marrow; it judges the thoughts and attitudes of the heart.” (Hebrews 4:12)

“All Scripture is God-breathed and is useful for teaching, rebuking, correcting and training in righteousness, so that the servant of God may be thoroughly equipped for every good work.” (2 Timothy 3:16-17) – God’s Word brings change!

“Be strong and very courageous. Be careful to obey all the law my servant Moses gave you; do not turn from it to the right or to the left, that you may be successful wherever you go. Keep this Book of the Law always on your lips; meditate on it day and night, so that you may be careful to do everything written in it. Then you will be prosperous and successful.” (Joshua 1:7-8)

Is it time you picked your bible up again…? The Word of God could literally change your life.

God responds when we respond to Him. Truth.

I have discovered that change comes in my life for the better when I respond to what God is asking me to do. I believe we reap what we sow. I’ve discovered that often simple acts of obedience can open the biggest doors and bring answers to prayer and unexpected favour from God.

He tore his clothes and wept. It was genuine. His relationship with God was such that he knew that He had let God down and it broke him.

Idolatry ended on his watch – what needs to end on your watch?!

In what way do you think God wants you to live differently from now on?

Often nothing will change until you change and respond to God…

Sometimes we have to be willing to humble ourselves before God:

James promises that if we will humble ourselves before God then He will lift us up…’ (James 4:10)

God loves it when we honour Him. He so blessed that man or that woman! He blessed Israel during Josiah’s reign and withheld the impending judgment.

Doing what is right can be a game changer. It can change your life.

I have a friend who is a builder and he was asked to quote to re-tarmac a major shopping mall. The reason he received the contract was because out of integrity he told them one of the car parks didn’t need doing for two years when they asked him to quote for the lot. God honoured him when he did what was right.

“Share with the Lord’s people who are in need. Practice hospitality.” (Romans 12:13)

You can change your situation by changing someone else’s.

In my opinion there are few greater joys than blessing someone else. Julia and I often send gifts to people who are struggling, we have in fact helped countless people out down the years from our own pockets. That’s our heart.

God sees (check out my post on this here)

God rewards what is done in secret.

“This is how we’ve come to understand and experience love: Christ sacrificed his life for us. This is why we ought to live sacrificially for our fellow believers, and not just be out for ourselves. If you see some brother or sister in need and have the means to do something about it but turn a cold shoulder and do nothing, what happens to God’s love? It disappears. And you made it disappear.” (1 John 3:16-17 MSG)

Who can you just really bless?

It will be a game changer for them and for you!

WHAT COULD BE A GAME CHANGER FOR YOU?

(Attributed to either Albert Einstein, Mark Twain and Benjamin Franklin)

I wonder where you really want to see your life change more than anything else?

What could change your outlook, present, past, future?

‘Above all else guard the heart for it is the well spring of life.’ (Proverbs 4:23)

What could change your relationships

What one thing could change your relationship with your spouse, sibling, parents, work mate, boss, teacher, neighbour, friend?

What could change your home or family life?

Are children running wild and disobediently?

What could be the game changer?

Who is going to take the lead?

Do you need to seek some help? Don’t be afraid to ask a friend or a pastor.

What could change your finances?

Here are some simple suggestions:

What could change your perspective on your career/job/ministry/service

“A man came across three masons who were working at chipping chunks of granite from large blocks. The first seemed unhappy at his job, chipping away and frequently looking at his watch. When the man asked what it was that he was doing, the first mason responded, rather curtly, “I’m hammering this stupid rock, and I can’t wait ’til 5 when I can go home.”

”A second mason, seemingly more interested in his work, was hammering diligently and when asked what it was that he was doing, answered, “Well, I’m moulding this block of rock so that it can be used with others to construct a wall. It’s not bad work, but I’ll sure be glad when it’s done.”

”A third mason was hammering at his block fervently, taking time to stand back and admire his work. He chipped off small pieces until he was satisfied that it was the best he could do. When he was questioned about his work he stopped, gazed skyward and proudly proclaimed, “I…am building a cathedral!”

The three men were all doing the same thing and yet all three had different attitudes:

President JF Kennedy was visiting NASA and saw a janitor mopping up the floor. JFK asked him what his job was at NASA and the gentleman said, “I’m helping send a man to the moon.”

It’s all about perspective.

Changing your perspective can change your life.

Game changer! Can you see the bigger picture?

You might feel you’re only laying bricks but in actual fact you’re building a cathedral.

You might feel you’re only serving on the team – but you’re changing lives – you’re part of His Kingdom – forcefully advancing into the community. Changing lives!

What could change your relationship with God?

Is it time to re-invest in the most important relationship of all?

What could change with a little imagination?

What would happen if you changed your thinking?

“Change your thoughts and you change your world.”

COULD YOU BECOME A GAME CHANGER FOR SOMEONE ELSE?

Josiah changed the life of so many in Israel.

What is God asking you to do?

Josiah was a game changing King. He brought change to his own life and the lives of so many others. What one thing do you think God is asking you to do right now that could potentially change your life or change someone else’ life….

If you’ve enjoyed this post you might like to check out my book entitled ‘Imagine’ that is all about trusting God based on the amazing promise in Proverbs 3:5-6. Imagine is available at Amazon and Barnes & Noble and other major book sellers worldwide.

One recent Amazon reviewer said, “This is an incredibly powerful book written as if the author is chatting to you about his own life, struggles and experiences during his ongoing walk with God. It is a very real and honest book with bible verses to back up what the author is sharing about. Personally this book is having a big impact on me and my faith in God. I would recommend to anyone to buy this book if you want to deepen your relationship with God at whatever stage you are in your walk. Imagine the impact this book could have on your life….”

Another reviewer said ‘A wonderful story of faith and dedication overcoming all obstacles. Full of practical advise and wise instruction. The book invites the reader to ‘dream dreams’ and to live out vision with tenacity and determination. A good hearty read.’ (Pastor Paul Hallam) 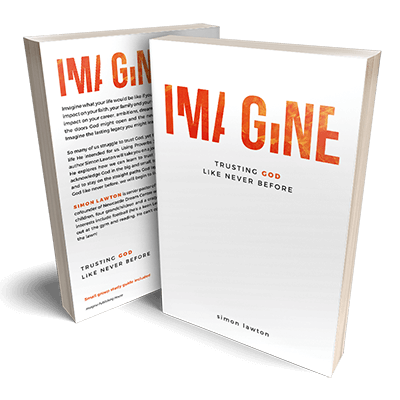 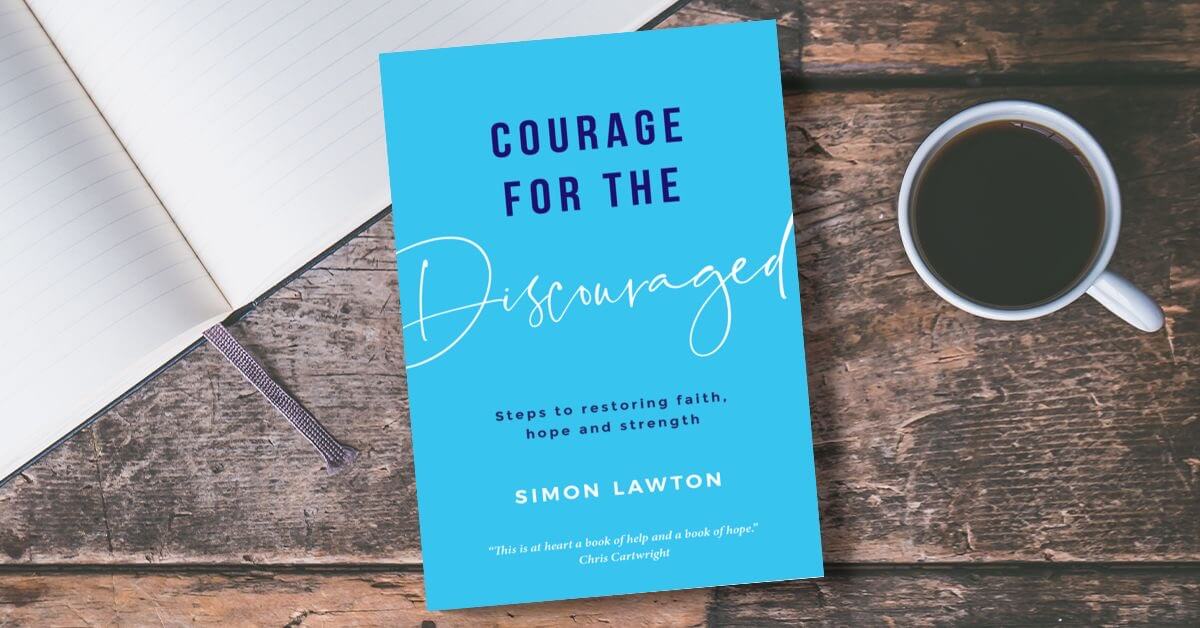 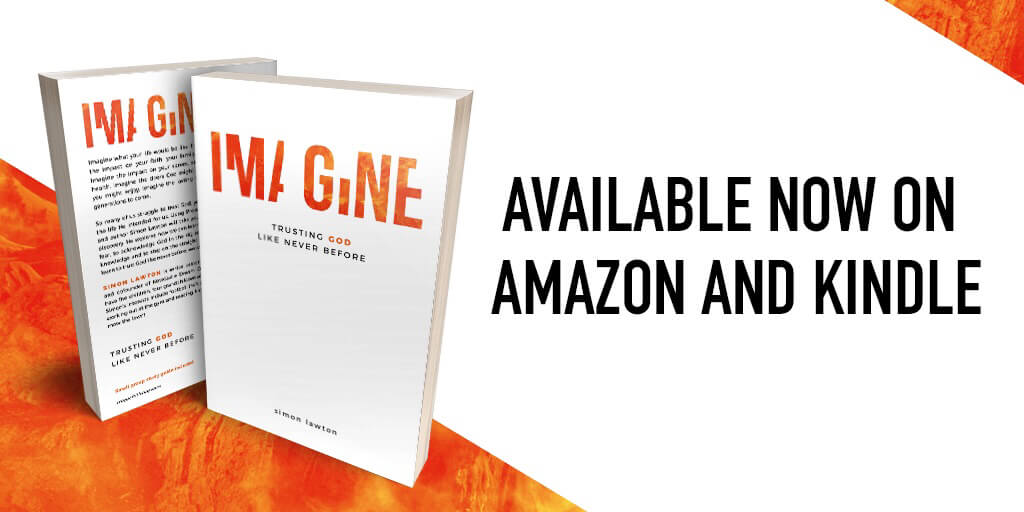